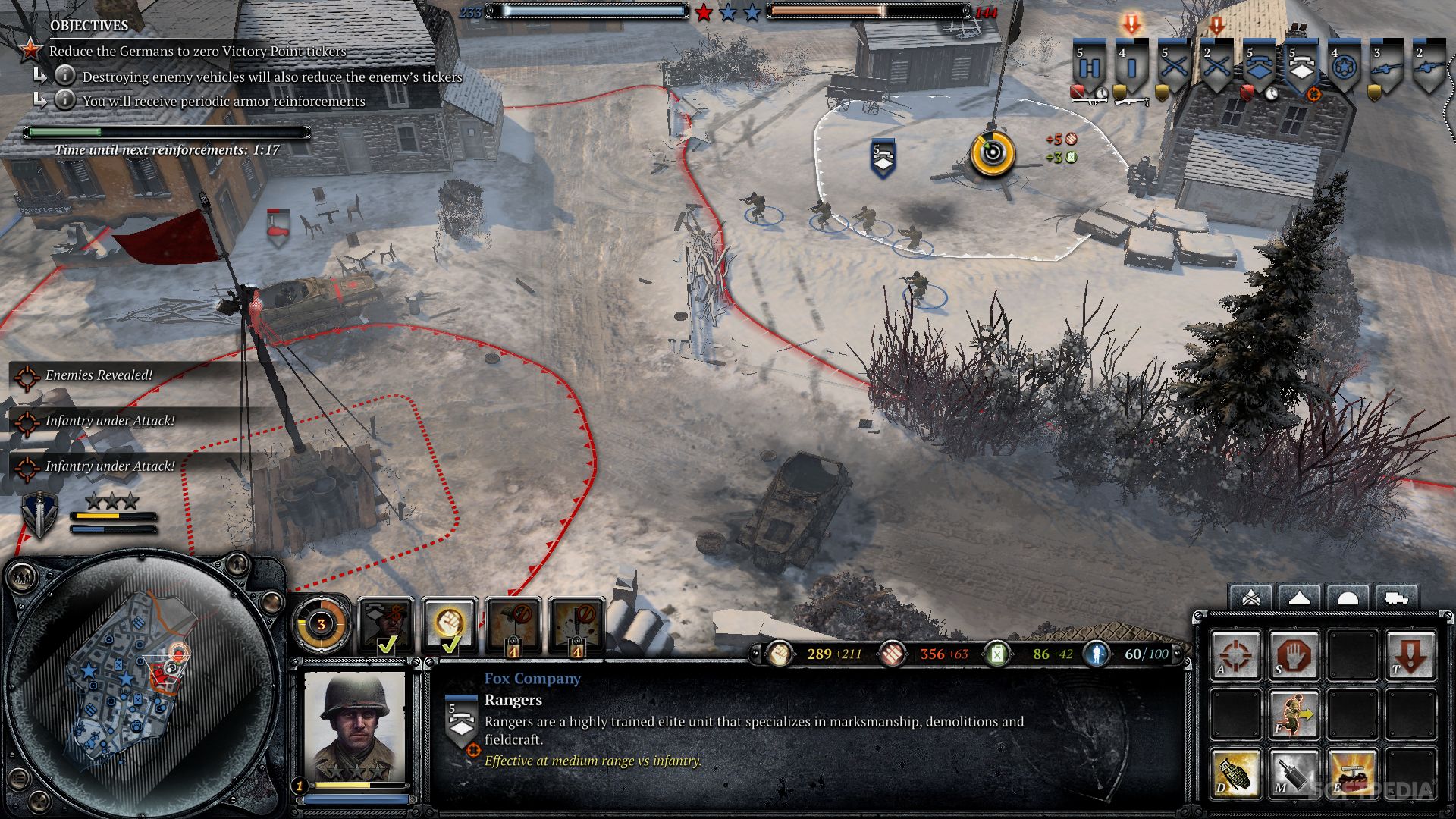 Company of Heroes 2 – Ardennes Assault feels like an attempt to show that the development team at Relic understands that it failed in its attempt to create a historically complex and engaging campaign for the original version of the title.

The Soviet campaign had some interesting ideas, but it failed to be as accurate as some fans wanted and as dramatic as other envisioned it, and Relic has since been focused on expanding the multiplayer side of the title, which manages to attract a solid audience and can still deliver some impressive matches.

The standalone nature of the new Ardennes Assault is clearly chosen to make sure that as many gamers as possible get access to it, and the structure of the single player itself points to how the series might evolve in the future and has some very solid ideas, even if not all of them are fully developed.

Company of Heroes 2 – Ardennes Assault chooses to explore one of the moments of the war that has not received too much attention in the gaming space over the years and it does so competently.

Players will be taken back in time to the moment in December 1944 when Nazi Germany launched the last major offensive of the war, trying to gain some time on the Western Front and to put the Allies on the back heel for a while.

This would have allowed it to move resources to the East and slow down the Russian advance, and maybe enter into a separate peace with the United States, France, and England. 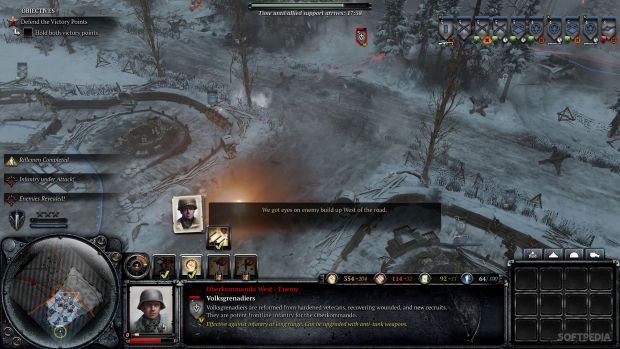 Ready for the engagement

This was the thinking of the German leadership, but their move was doomed even under the best conditions, and the offensive, even if it posed major problems for the Allies, failed to reach any of its major objectives.

American forces were the most affected and had a lot of casualties, but Company of Heroes 2 – Ardennes Assault, while staying close to history, fails to explain that, on a strategic level, the Battle of the Bulge was not a potentially catastrophic moment.

The structure of the campaign is very inspired, with the player able to choose three out of four core forces to command.

Relic also offers plenty of historical context and I found myself often reading up on the various locations and situations after completing the missions in order to gain more knowledge about the Battle of the Bulge in the real world and to try to compare my performance with that of real world commanders.

Company of Heroes 2 – Ardennes Assault keeps the core elements of the series when it comes to the tactical battles, but it introduces an all new strategic layer which involves some interesting new choices for players and will increase the replayability of the entire content.

Gamers can control three companies, each with its own set of unique powers and special units, and each can move independently on the map, capturing territories.

The Germans start off mainly in control and have reinforced territories, but the Allies can move around to deny them assets and to try and limit further strengthening of their best supplied areas.

Each of the companies has a strength, affected by movement and by the losses suffered, and it can also gain both experience and requisition, which can be used to replace losses or to upgrade its capabilities.

The concept is interesting, if somewhat limited by the fact that only the Allies move around and cause things to happen, which is not a good representation of the way a major operation in World War II actually worked.

It pays to try and conserve units and keep strength up when enemy forces are light and cannot fortify in order to then deploy it when a tough mission comes up.

Once a territory is attacked by a company, gamers will get to play a variation of the classic Company of Heroes 2 experience, with objectives sometimes thrown into the mix to force gamers to move fast and with limitations sometimes in effect to increase the difficulty level.

The Artificial Intelligence is solid enough to counter in force when players spread their forces too thin and to try and probe undefended resources nodes, but for a gamer who has played the original campaign, it should not pose too much of a challenge.

Gamers need to make sure that they have plenty of ammo in order to equip their squads with the weapons required for their mission, and anti-tank abilities will be especially necessary as the Germans have a tendency to launch powerful armored counterattacks when a player gets close to achieving an objective.

Relic has done a good job when it comes to variety in missions, and there are a couple that I only managed to finish after playing through a few times, reflecting the actual difficulties the US forces faced in the real Battle of the Bulge.

Company of Heroes 2 – Ardennes Assault does not introduce a new engine or any significant upgrade to the existing one, but the game still looks very good on computers powerful enough to push all options to the max.

The map design in the standalone expansion is also very solid and creates solid chokepoints to control and areas where more pitched battles can take place, but it also encourages players to apply some innovative thinking when trying to reach their objectives. 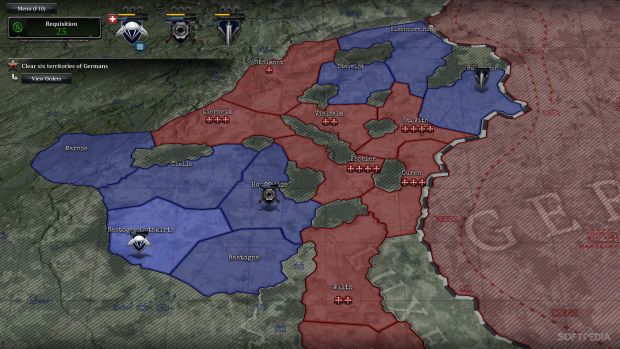 The snowed-in landscapes and the associated destruction also manage to capture the effects of war very well, although the final result is a little too close to the steppes of Russia.

The movie presentations included before each mission also both look good and deliver some solid information, although they are a little heavy on the drama.

Company of Heroes 2 – Ardennes Assault also offers good sound design, some suitably gruff voice acting and soaring soundtrack, all of them being good ways to add some immersion both in and out of combat.

Company of Heroes 2 – Ardennes Assault allows gamers to also play multiplayer, even if it is focused on the story told in the campaign, and matches are still very fun with the right opponent and a solid choice of maps, of which there are now more than ever.

Training against the AI is poor preparation for fighting a human, especially if it’s a veteran who has been playing since the strategy title was first introduced, and even those who have experience can be flummoxed by some of the changes.

Relic is delivering patches that take into account the feedback that gamers offer and Company of Heroes 2 seems to have found a solid and mostly respectful player base.

Company of Heroes 2 – Ardennes Assault is a good standalone package and the campaign that Relic has created manages to capture the tension associated with the Battle of the Bulge, although there are some moments when the company deviates from historical reality in order to increase the dramatic element.

The various companies ensure that battles are different enough to keep players engaged and the various upgrades deliver a lot of replayability.

Company of Heroes 2 – Ardennes Assault should have arrived earlier in the lifetime of the game, which by now might be too associated with its multiplayer side to become appealing again to those who enjoy their strategy experiences solo.

But the strategic map and the management options point to how the familiar formula of the series can be enhanced, and I would like to see how Relic deals with the North African front, the battles in Scandinavia, or the engagements in Italy, some of the most overlooked elements of World War II.

‘Final Fantasy VII Remake’ Review: More Of A Rebuild Than A Remake