When I played the original Company of Heroes in 2006, I struggled to think of how a World War II real-time strategy game could look or play a whole lot better than it does. Apparently, so has its developer, Relic, because seven years later Company of Heroes 2 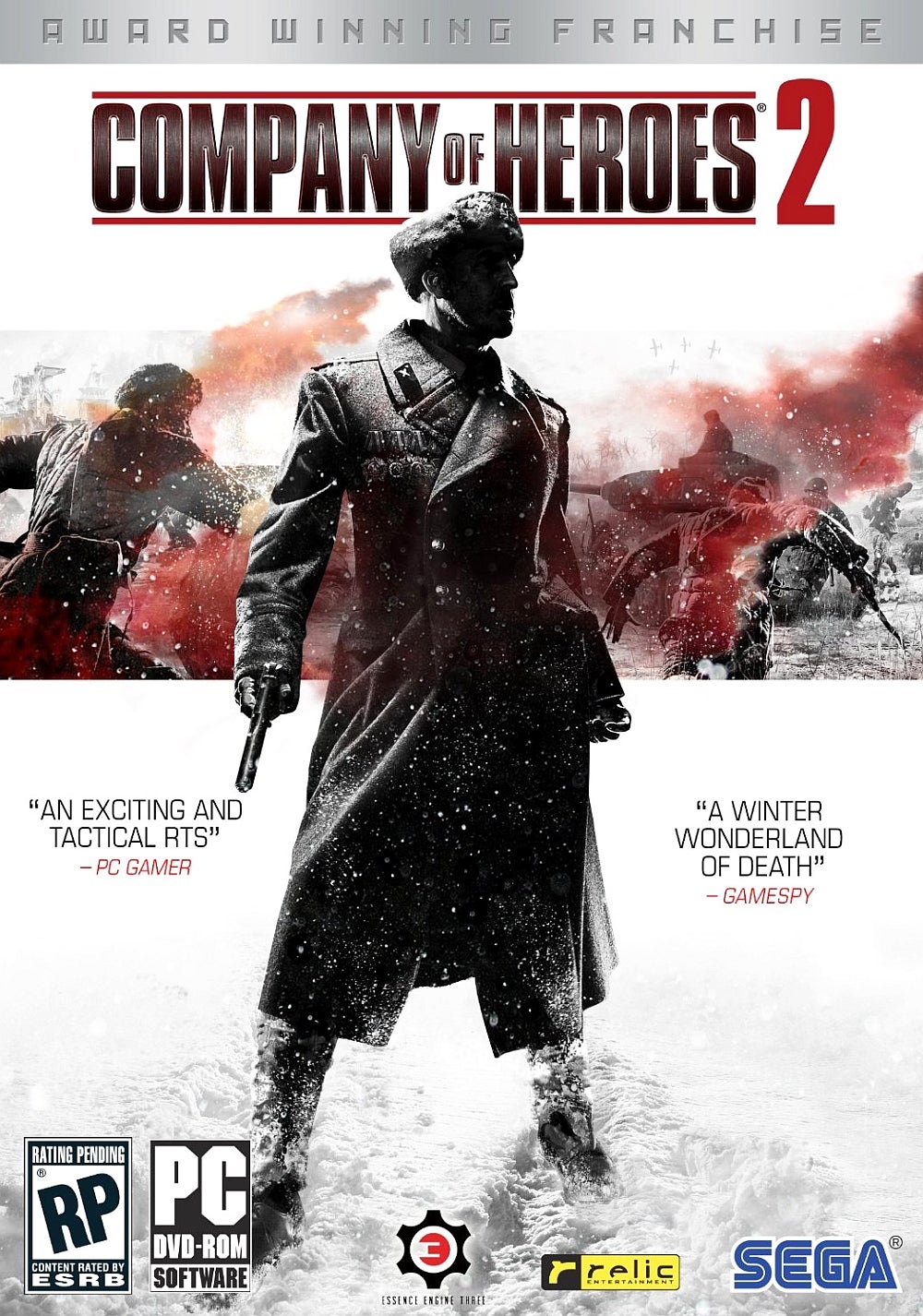 is strikingly similar. There are, of course, subtle visual improvements and numerous hit-or-miss gameplay tweaks as the series transitions from the Western Front to the Eastern, but this is very much a new spin on the same game. Of course, the original CoH has held up remarkably well (if you haven’t played it, you absolutely should) so I welcome something that looks and plays like it with open arms, even if it’s not necessarily a better version.

Because it’s so similar to the original, Company of Heroes 2 is great for all the same reasons. More than most real-time strategy games, CoH is all about using smart tactical positioning to take advantage of cover and exploit weak tank armor. And because armies are rarely more than a dozen units at a time, it has a relatively slower, more methodical pace than a traditional RTS, even though there’s almost always something going on. Its territory-based resource system, now revised to allow you to influence which of the three resources a held point generates, allows a style of play that’s focused almost entirely on tactics. I particularly appreciate the ability to win a battle by attacking an enemy where he’s not, rather than meeting him head-on. I don’t mean to imply that it requires a more tactical mind than a game like StarCraft II, but it’s weighted more toward planning than reflexes in a way that I find rewarding.

The detail in the units and world is extravagant. Watching an impressively modeled tank crash through a wall, turn its independently moving turret, and blast an armored car to bits in a spectacular explosion that sends its driver flying through the air and kicks up a huge cloud of smoke and debris with a deafening boom is really astonishing. Each infantry unit is animated and voiced in a lifelike way, and equipped with unique uniforms and weapons. Watching your soldiers set up and fire a heavy machine gun or mortar is a treat, and hearing their heavily accented chatter and convincing screams of pain in combat makes it easy to get attached to veteran squads, even though they’re nameless fodder.The German force in CoH2 is a tweaked version of what we saw in CoH and works in mostly the same way, but the new Soviet Red Army has a fresh, unique style that reflects the manpower advantage they had in the war. Reinforcing units on the front lines by filling the ranks from conscript squads demands more hands-on management than the Germans’ traditional method of relying on Halftracks for a trickle of front-line reinforcements, but it comes with the interesting tradeoff of allowing elite squads to instantly return to full strength that makes that effort worthwhile. The Soviets get several other advantages, including two-man sniper teams that will always trump a single German sniper in a duel (because the Soviets can take a hit and still shoot back), and those can be a real benefit to players who like to harass.

A lengthy 14-mission single-player campaign (all from the Russian side) goes from the Soviets’ desperate defense against the Nazis’ advance on Stalingrad all the way to the fall of Berlin in 1945. If you know your history, you know it’s a grim ride. Relic makes an effort to soften the historical horror show by framing the Soviet campaign as the tale of good men fighting to defend their homeland rather than for the ideals of a mass-murdering dictator (the same trick employed in the Company of Heroes: Opposing Fronts expansion). Nevertheless, it has a bad habit of rewarding my hard-fought victories with a harsh dose of depressing historical reality. Did someone do something selfless and noble? Comrade Stalin’s not going to like that. But Relic didn’t write history, and to sugarcoat the horrors of the Eastern Front would’ve been a much greater sin.It’s a campaign that, as a whole, is mostly a retread of what worked in Company of Heroes – a series of search-and-destroy and holdout defense objectives. It’s competent and challenging, but holds few surprises and never really rises to the same level of the original. Only one mission, in which badly outgunned Soviet infantry have to take down a virtually invulnerable Tiger tank that chases them through the streets of a town in a game of heavily armored cat and mouse, really stood out to me as inspired. It showcases the new true line-of-sight system nicely by encouraging you to ambush the Tiger and lure it into mines, but also makes you uncertain of its precise location.

Snow is the other major new mechanic introduced, but other than adding some beauty and diversity to the landscape and lending authenticity to the setting (where the brutal cold arguably had almost as much to do with defeating the Nazis as the Soviets did) I found the increased micromanagement needed to keep infantry alive to be engaging for a total of one level before it was simply restrictive. After having played two StarCraft II campaigns since the last Company of Heroes, the intermittent blizzards that threaten to freeze troops to death if left in the open felt like a gimmick that should’ve kicked in for one level and then gone away before they wore out their welcome.

I’m also not overjoyed at the dramatic lethality of flamethrowers, particularly the ones affixed to the German halftrack trucks as an upgrade. They’re counterable by any anti-tank weapon, so I can’t call them unbalanced, but the speed with which they deep-fry multiple infantry units out of existence disrupts the slower, more tactical pacing I love about CoH. Generally you have time to recover from being caught off guard and recall your men to base before they’re completely wiped out to preserve their veterancy status, but flames can rob you of those prized troops in the blink of an eye. Oh, and flames ignore cover.

Some of the best stuff in Company of Heroes 2 is in the Theater of War modes, which have both single-player and co-op challenges where you can compete for high scores on leaderboards. Some are basic holdout missions, but others are more creative. In one, you use Soviet rocket trucks to obliterate as many German-held and neutral buildings as possible to scorch the earth behind a retreat; in another, you use a small squad of German armor to capture at least 10 points on a large map. What I want to know is: why weren’t these mission objectives included in the campaign? They feel like campaign missions and are much more interestingly designed. I do like that they’re broken out here for easy repeated play, though.

Every mission you complete in the campaign and Theater of War gives you a set of medals that appear on your profile page – part of a life-extending persistent metagame Relic’s built around leveling yourself up to unlock bonuses and vehicle skins. As a rule, I’m generally opposed to unlocks of any kind in an RTS, as a perfectly level playing field should be the goal of any competitive strategy game. Here, at least, the earned bonuses are small enough to be nearly imperceptible to most players – a 2% bonus to a given unit’s firepower isn’t going to make the difference for the non-hardcore. (The hardcore players are likely to level up quickly anyway.)

Competitive multiplayer maps are plentiful, and broken down into winter and summer varieties. Those infantry-hampering blizzards only happen on the former, so they’re available as a good, optional change of pace. The most divisive change to multiplayer, though, is the revised Commander Abilities system, which is now less of a tree and more a series of linear tracks that you pick between early in a match. It results in locking you into a set of abilities, such as the German Festung Support Doctrine that grants abilities like off-map artillery and auto-reinforcing infantry, or the Soviet Guard Motor Coordination Tactics, which is an armor specialization that can summon medium tanks and debuff enemy armor. The new system limits your ability to pivot your strategy mid-game if you’re caught off guard. But as one of my long-standing issues with Company of Heroes is having to make selections while my tanks are exploding behind the menu that fills the screen, this new system is not without its charms. I’m more concerned about its future use as an avenue for DLC – allowing players to purchase alternate tracks with new abilities seems like an invitation to introduce balance issues. But that’s a hypothetical.

So at least this system isn’t likely to do significant harm to the balance, and may give completionist players a reason to keep jumping into multiplayer for months. If it works as the similar system in League of Legends and its ilk has, the CoH2 multiplayer community could see a lively old age. Relic definitely seems to have built Company of Heroes 2 to last well after the campaign ends, and has even integrated Twitch.tv support for streaming and watching competitive games.