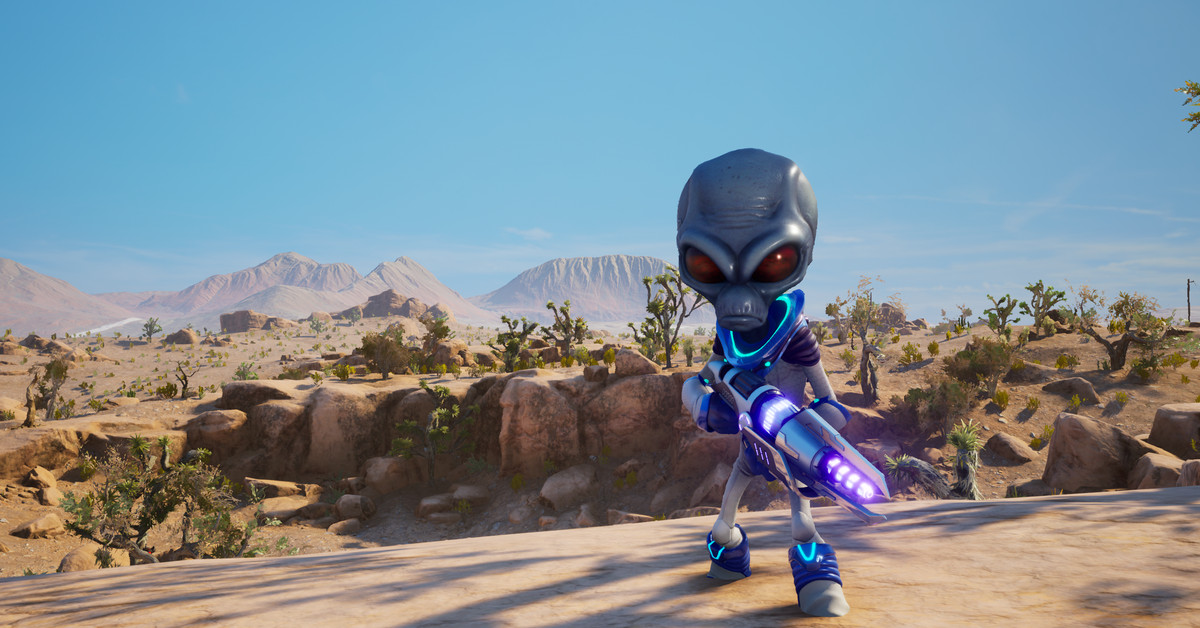 If you love the Destroy All Humans! series, which only ran for three years but had four games, then the headline tells you everything you need to know: Developer Black Forest Games has done a superb job reproducing the original 2005 cult classic by the now-defunct Pandemic Studios. This remaster, which I played on Windows PC, runs swimmingly, looks better than most games on Steam, and stays loyal to the source material.

That last part is the reason folks considering the series for the first time may want to proceed with a bit more caution. Destroy All Humans! is a gleeful open-world chaos simulator. It’s also a time capsule of “comedy” video games of the early 2000s, crudely imitating the South Park model of “equal opportunity offender.”

You play as Cryptosporidium-137, an alien clone produced by the Furon species. Your predecessor, Crypto-136, has crash-landed on Earth, and it’s your job to find your clone sibling, recover any alien technology, and mine humans for Furon DNA, which was woven into the human population millennia ago by Furons who presumably raped hundreds of thousands of human women. The game compares the ancient Furon exploits on Earth to “sailors” having a good time. I told you — the “jokes” aren’t great.

Anyway, all humans have a little bit of Furon DNA, and you’re tasked with harvesting it.

This grand quest sends Crypto on a tour of six mini-open worlds in the United States circa 1959, ranging from Midwest farmland to a California beach town and then over to a parody of Washington, D.C. Each locale has its own set of story missions, along with a collection of optional side quests in which Crypto must race a drone, abduct dozens of humans, or destroy as much property as possible. Completing missions awards you space bucks that you can spend on upgrades — I’ll get to those in just a moment.

Nearly everything in the game can be obliterated with your UFO’s lasers, including trailer parks, homes, factories, and, of course, parodies of a few iconic American landmarks. Developer Pandemic popularized and improved this open-world destruction with its Mercenaries series, but even in 2020, Destroy All Humans!’ shift from micro- to macro-destruction is impressive.

Most of the missions, however, keep you on foot as the diminutive Crypto-137. While you can’t demolish a building in seconds, the alien has a variety of weapons and abilities. It can disguise itself as a human to enter restricted areas, and it can force humans to follow it or just to dance in place like drunken fools. Crypto carries the arsenal of a small army in its pockets, including a death ray that arcs electricity between human targets, and a black hole that dematerializes everything in its radius.

Every weapon has its own set of upgrades, as do Crypto’s ship, shields, and telekinetic abilities. Telekinesis is the showpiece — your little alien lifting cows and people and cars, and firing them into the horizon, never gets tiresome. My favorite upgrade turns Crypto’s feet into a hoverboard, allowing him to skate, Tony Hawk-style, across crowded suburbs and empty deserts.

There’s no good reason for this skateboard mechanic to be in the game, other than the fact that it feels fun. Which really sums up Destroy All Humans! in general.

This brand of humor is inescapable, firing in all directions. One minute, you get jokes about soup-for-brains hillbillies, fear-exploiting Republicans, the existential oppression of the nuclear family, and the nationalistic paranoia of the Red Scare. The next minute, you kidnap a beauty queen for bodily experiments, or fire your probe gun into the rectums of government agents, causing the men to grab their butts as their brains are plucked through their assholes.

It isn’t shockingly offensive, just dated and not particularly funny; the humor misses more than it hits. It’s gross when it punches down, and toothless when it punches up … but these jokes are 15 years old at this point, and political humor has a shelf life of about an hour in 2020.

The people responsible for the Destroy All Humans! remake must know how challenging it is for stale humor to land these days, as the game begins with a tonally spot-on warning screen:

Humans of planet Earth, be advised: while the experience has been upgraded, the content and historical record of the original invasion of the Furons remains a near identical clone! The story, words, and images contained within may be shocking to the modern human brain!

This approach — loyalty to the source material at all costs — has dated the game’s humor, even as the play itself stands up when compared to more modern games. It’s an issue that we’ve seen before, and will continue to see as long as this kind of remaster remains popular.

Destroy All Humans! is a relic from a different time

Destroy All Humans! feels like a video game built by the gut instinct of what its creators enjoyed. That means plenty of dopey jokes. Plenty! It also means stealthily entering Area 51 via human camouflage, reading the minds of soldiers for precious information, jetpacking onto the roof of the laboratory, and raining hell on Earth, catching missiles out of the air and hurling them at approaching tanks.

It isn’t always a good game, but Destroy All Humans! constantly feels good to play, assuming you can stomach the “raunchy” humor that has aged like a breakfast burrito left in the sun all weekend. A big assumption, I know.

Or, to put it another way: Destroy All Humans! is a damn fine B-game from an era when publishers bothered to fund such things. I wish there were more new games taking these bizarre, silly swings at ridiculous ideas with sizable budgets. For now, I guess, remakes from a different time will have to suffice.

Destroy All Humans! launches July 28 on PlayStation 4, Windows PC, and Xbox One, and is coming to Stadia in the fall. The game was reviewed on PC using a Steam download code provided by THQ Nordic. Vox Media has affiliate partnerships. These do not influence editorial content, though Vox Media may earn commissions for products purchased via affiliate links. You can find additional information about Polygon’s ethics policy here.

Terrorize the people of 1950s Earth in the role of the evil alien Crypto-137. Harvest their DNA and bring down the US government in the faithful remake of the legendary alien invasion action adventure.