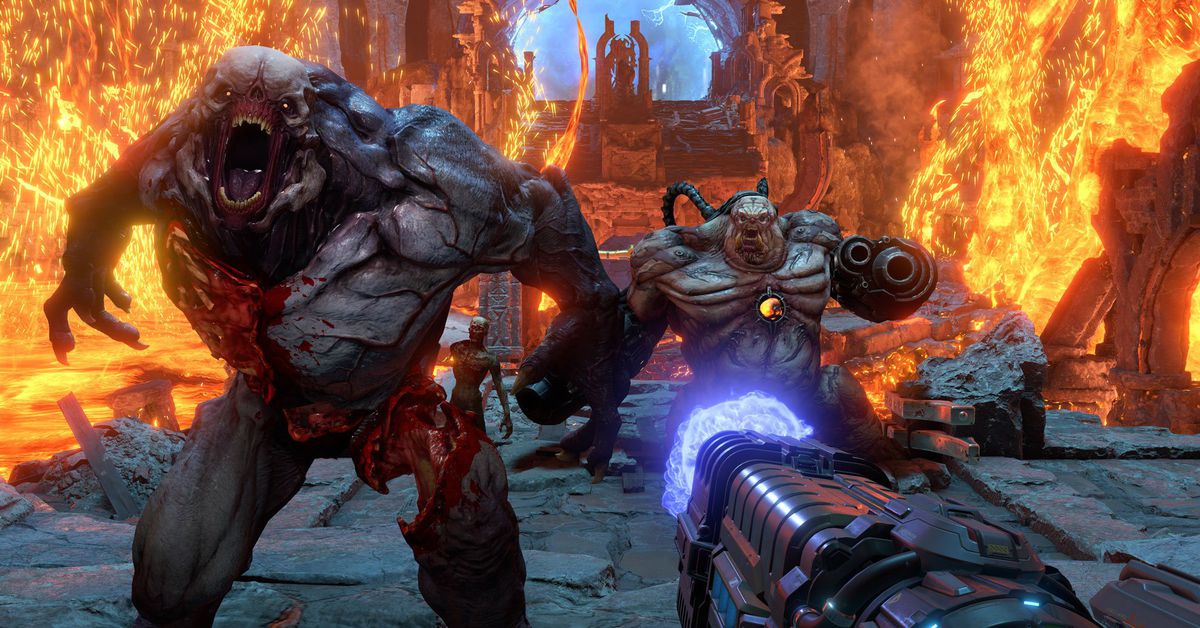 Have you ever noticed how cop procedurals will signal that a messy-haired teenager is a real loner type by showing him playing a video game, sitting in a dark bedroom littered with junk food, the walls covered in heavy metal posters?

The game itself (because we always get to see gameplay, even though the show clearly can’t afford good computer animation) appears to be a parody of violent video games, all disembowelment and close-range executions. The teen, played by a 20-something actor, manhandles his poor controller, suggesting the game is either astonishingly complex or the teenager is dumb as a rock.

That’s Doom Eternal. All of it. The Mountain Dew and Cheetos. The Dream Theater albums. The hand-cramping controls. And the overwhelming sense that everybody involved is in on the joke, and having a good time. That lack of shame makes all the difference.

When you play Doom Eternal (and you should play Doom Eternal), you will see a space marine running and jumping across blood-soaked torture chambers, while shooting, burning, freezing, chainsawing, and generally mangling demons. You move from point A to point B, killing everything in between. Sometimes you need a keycard to open a locked door. Most of the time, you simply need to kill something a little more challenging than the thing you killed in the previous room.

The story picks up where Doom (2016) left off: Demons have overtaken Earth. You are a literal one-man army, on the path to becoming either a god or a killer of gods. Your quest to kill three space witches will take you from the aforementioned demon-infested Earth to a demon-infested Mars and back, with some pit stops at your space base, the Fortress of Doom, a hybrid space station and medieval castle floating somewhere (best I can tell) near the moon.

Doom Eternal is like Doom (2016) but with greater scope and clearer intent. Doom (2016) infamously fell into development hell, with its developer, id, spending years reimagining the project like a person in a desert chasing after hallucinations before finally locating actual water. Doom (2016) felt like a game that happened despite itself. Doom Eternal, on the other hand, feels purposeful, like every team member had strived for one goal: to turn the magic of death-metal album covers into a video game. Friends, they did it.

Everything is more “badass” (and I never say the word “badass”). The super shotgun has a grappling hook that can catch demons on fire. Badass! You can tell how badly a demon is injured by how much skin and muscle you’ve blasted off its skeleton. Badass! Instead of a pistol, you start the game with a shotgun. Badass!

Developer id and publisher Bethesda have invested small mountains of money in cutscenes, but even our hero seems bored by them, never saying a word, literally walking through the cinematics, and cutting one-sided conversations short with the occasional bullet to the noggin. He doesn’t have time for all this fantasy lore baloney; he has evil to tear apart. His name is Doomguy. What else can you expect?

My inner teenager has a soft spot for the aesthetic, but what makes Doom Eternal special isn’t what you see when you play, but what you feel. And what you feel … it’s like dancing. The movement is a pleasure. With ease, I’m gliding across the floor and through the air, choosing the best steps to maintain momentum and grace, seamlessly swapping between partners that I twirl, toss, and gut like a fish. It’s a ballet, albeit drenched in viscera and set to crunching guitar riffs.

Each room contains bounties of enemies, all of whom unload a variety of punches and smashing attacks, fireballs, and laser beams so quickly that you have no option but to run, firing from the hip at everything that moves. Weak enemies materialize with the regularity of a Slayer song’s drumbeat, which is actually a true blessing. Each demon is a living piñata, spewing health and armor energy when you perform a well-timed melee kill or light them aflame with your shoulder-mounted flamethrower — a new addition to the series. Finding the perfect rhythm of fire, bullets, and melee turns demons into humanoid sprinklers that spurt green and blue tokens, accompanied by a euphoric metallic sound effect that’s similar to a slot machine dropping coins.

Rapidly, you meet bigger, stronger, and deadlier enemies that just so happen to be susceptible to whichever new weapon is waiting nearby. A sniper shot or a sticky grenade removes turrets off the spine of a giant, anthropomorphic brain. Heat-seeking rockets chase a teleporting hell ghoul. A turret shield provides a moment to catch your breath in the middle of a fight, while also peeling the flesh off a demon like an orange.

On the surface, Doom Eternal is a callback to everything that led the gaming industry to form its own ratings board: a celebration of violence, a fetishization of heavy weapons, and a flirtation with the satanic arts. Under that surface, though, lies an intricate and outstanding feat of balance, an act of creative maturity that suggests years of experience in not merely making this sort of game, but making it look easy. Every option for violence in the game, every weapon and encounter, contributes to the action holistically, like an elaborate upgrade of roshambo.

When it clicks for you — when you instinctively know to use a freezing grenade (also new to this entry) to slow a powerful demon, light a creeping horde on fire for its abundance of armor, send a flaming arrow into a flying beast, smash the flaming horde for health, and then cleave the original frozen baddie in half right before it thaws — you feel like Doomguy. And Doomguy feels like a god. It takes a lot of smarts to make something that often sounds stupid while feeling so exhilarating and mentally taxing.

That dichotomy of great skill being applied to the absurd adventure of a demon slayer is precisely why I adore Doom as a series. It’s why Polygon named Doom Eternal’s predecessor, which was only called Doom, our game of the year in 2016. The series provides silly, meathead escapism while often concealing the engineering, craftsmanship, artistry, and risk-taking necessary to produce a game that looks this familiar, yet feels fresh.

Doom Eternal stands apart from its contemporaries, the big, gaudy, self-serious first-person shooters like Call of Duty and Battlefield that demand instant, microscopic movements to perform headshots in order to survive against preternaturally gifted teens. Competitive players of those franchises grapple with each patch’s meta, while memorizing maps, angles, and weapon advantages. It’s a popular approach to AAA first-person shooter design, but for all the grand scope and spectacle, the “fun” of these shooters largely takes place down the sights of a gun. Only one weapon in Doom Eternal includes a traditional scope, and it’s an optional upgrade. Ammo can be found in the chest cavity of every enemy, so there’s no need to be precious about firing from the hip.

In Doom Eternal, the “fun” is in the movement. Because you must restore health and armor with close-range attacks, moving in and out of scrimmages becomes the foundation of winning strategies. A double jump, a double dash, and a hook that pulls you toward its living target all allow you to establish your distance, as do environments sprinkled with walls, hills, tunnels, platforms, and monkey bars — all meant to be used for cover and escape, but also your own amusement.

Despite having weapons that can bring instant death to an entire room, you can’t survive exclusively by playing aggressively, because one wave of enemies typically gives way to another wave, and then another. A good fight requires constant decision-making: which weapon to use against which enemy, what ammo to conserve, when to mine weak demons for health, and when to rip out the biggest enemy’s soul.

Between the dozens of action set-pieces, id has added a bunch of platforming sequences that are fine. They’re just fine. Listen: In most cases, first-person platforming in video games feels like a crime, but I rarely felt frustrated when jumping across hundred-foot chasms at supercar speeds. For the most part, the platforming exists to showcase the gargantuan environments, moving the franchise far outside its roots in claustrophobic corridors. Doom Eternal understands scope, and is willing to go big to hammer home the fact that the demons are a legitimate threat to the planet, not just to a dimly lit moon base or spaceship.

The game struggles only when something forces you to stop.

One stage in Doom Eternal’s midsection hews closely to the Call of Duty formula, favoring cramped, linear hallways and floors covered in purple goo that literally slows the action, preventing the all-important dashing and jumping. The recurring joke about demons being “mortally challenged” is a buzzkill, knocking the smile off my face every single irritating time it’s delivered. And then the final third of the game introduces swimming. On dry land, Doom Eternal is an improvised dance. Underwater, the game devolves into pin the tail on the donkey. Movement while swimming is stilted. It’s hard to see. And the only goal is to fumble about in search of the right glowing target to smash, hoping it will bring an end to the supposedly fun distraction.

Late stages sometimes trade the skate park-style arenas of the early acts for large, simple open spaces larded with tons of boss-tier demons. On a few occasions, an adrenaline-fueled run came to a full stop when I found myself stuck between a few large enemies and the world’s geometry, unable to run, jump, or dash. I was stuck, helpless, waiting to die.

One enemy, the Marauder, requires singular focus, more akin to a Dark Souls flavor of combat. This encounter would be fine on its own, but, like all of the game’s flaws, it brings the momentum to a joyless halt.

Yes, the second half has its blemishes (or, to go back to our dancing metaphor, its missteps). And that’s reasonable. Doom Eternal has one of the strongest, leanest, and most confident first halves of any action game, or really, any big-budget game ever. But let me be clear: This isn’t the point in the review where I tell you the second half is a disappointment. It’s not. It’s great, and at times near perfection. You know, the times when it’s not asking me to swim in poisonous acid to unlock another door.

I want to tell you more, especially about the developer’s generosity of design. All the cheat codes you can unlock, the toys you can collect, the fortress you can decorate and explore. I’d love to spoil all of it, but I won’t. You should discover the specifics on your own.

Treat Doom Eternal like dessert — something to be savored, not hurried. When you have the rare moment between feeding one demon its own heart and breaking another demon’s arm and hammering the freshly protruding bone through the demon’s skull, take a breath to admire the engineering and artistry that makes your actions possible, how the world encourages playful movement, how the specific design of an arena and the placement of each enemy invites you to chain your violence in one ecstatic flourish. Always be moving, but never rush.

Lee Ann Womack put it best: I hope you dance.

Doom Eternal will be released March 20 on PlayStation 4, Google Stadia, Windows PC, and Xbox One; a Nintendo Switch version is also in development. The game was reviewed using a download code provided by Bethesda Softworks. You can find additional information about Polygon’s ethics policy here.

Ed. note: The full campaign was completed on Ultra-Violence difficulty. We have decided to reserve our impressions of all online play until after release, when the servers are live.

Starcraft II: Legacy Of The Void

The Last of Us Part II is uncomfortable and exhausting, but that’s what makes it great