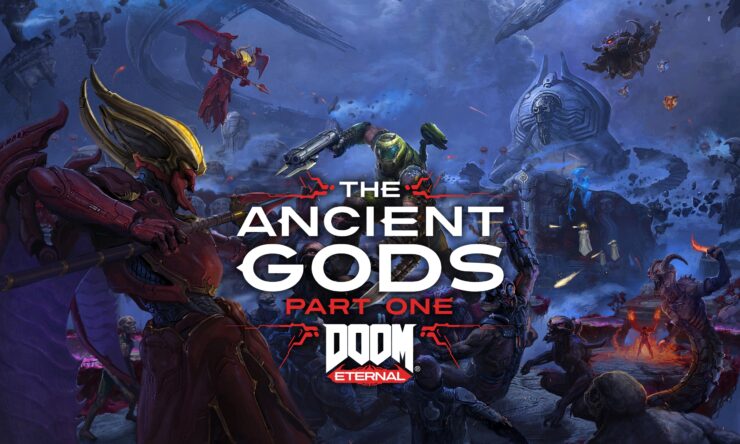 Doom Eternal: The Ancient Gods – Part One has taught me something. Actually, it has taught me a few things. The first is that you can unlearn how to play Doom. It seems a lifetime ago when I reviewed the game, though it was only seven months ago. That’s more indicative of how long 2020 has been, not that I have the lifespan of a mayfly. The second thing is that the art of creating a good, meaty, expansion isn’t lost in the games industry.

It would be easy to be concerned about the latter aspect due to this being literally named “part One”. There’s no need to be concerned, about that. What you need to be concerned about is the fact that you are going to die, a hell of a lot. You could set the difficulty to “babies first sippy-cup” and this DLC would be challenging you. Doom Eternal: The Ancient Gods – Part One starts with a few minutes of story and then boom, you’re dropped on some sort of oil rig that is infested with the worst denizens of hell.

No Straight Roads Gets Jolly in New ‘Christmas Edition’ Update

That’s probably the strangest part of this DLC, there is no ramping up of difficulty. It genuinely feels like it should be set maybe another half-a-game after the final level of the original campaign, it’s that furiously frenetic and full of fearsome foes. That masterful use of alliteration aside, I’m simply saying that this DLC is actually too difficult. Or, at least, it’s that difficult that you desperately need to prepare yourself with a little self-torture or playing the last few levels of the campaign again.

I’m not sure if ID Software thinks they need to make up for the fact that the story in this extra piece of content is paper-thin. Let me tell you now ID, you don’t. Nobody – bar the strangely subnormal – comes to Doom or Doom Eternal for the story. No, the people are coming for combat. This is offered up in spades across what are three terribly challenging, levels.

“Three. I thought you said it is meaty?” I hear you ask. Yes, three. But these aren’t short levels. Honestly, with the amount of traversing you do, the sheer number of combat-arenas, you’ll find that the three levels will take you a good five hours. For me, it was… more than that. I died more times in these three levels than I did in the whole of the original campaign. Frankly, it got to the stage where I wasn’t having that much fun with the game.

I’m not saying that it can’t be fun. When I got into the fast-paced swing of combat in Doom Eternal: The Ancient Gods – Part One, it could genuinely be fun and engaging. What puts me off more than anything is that there is no difficulty curve. You come into this DLC and you run into a brick wall. You die. You run into another brick wall. Die again. The denizens of hell are everywhere, and they just keep coming in larger and larger numbers.

You very well may find yourself getting to that part due to several reasons. Maybe it’s because the difficulty of the combat arenas is set at endgame-times-two. Maybe it’s due to the sheer number of enemies that you’re running out of bullets, even with the regenerative cycle of the glory kill and chainsaw finishers. If it isn’t that, you could get to that stage due to the navigation of the levels. In my original review, I stated: “There are a few frustrations to be found within the environmental puzzles, having to time almost too perfectly jumps onto monkey bars and dashes to clear large gaps.” This continues.

While you could technically say there is a difficulty curve because later combat arenas have more enemies, I’m finding it hard to see a distinction between scaling the Antonine Wall, Hadrian’s Wall and The Great Wall of China. Either way, I’m falling flat on my arse. Eventually, it starts to get sore. Eventually, you start to think “what’s the point?” I didn’t get to that stage when playing this DLC, though I wasn’t far off. I couldn’t blame anybody if they did.

What I will say is that aesthetically, at least, the levels here in the expansion are different enough to not feel too samey. An oil rig, a swamp, and a magical city. It’s different to Earth, starting to look like hell. Mars and… well, hell. Okay, not completely different since the swamp is a blood swamp and part of hell, but at least it’s swampy. I’m running out of things to say now. It’s more Doom Eternal.

In a way, despite the removal of needless exposition, ID has moved away from what makes Doom, Doom. As well as the increase of platforming, Doom Eternal: The Ancient Gods – Part One is joined by enemies that are completely antithetical to the style of gameplay you expect. Turrets and certain enemies require too much precision, or even specific types of attacks to kill them. Gods may have gotten rid of the exposition, but it’s replaced this with more things that just aren’t Doom.

Do I like Doom Eternal: The Ancient Gods – Part One? Yes and No. As a meaty chunk of “More Doom”, it doesn’t go far wrong. It makes a few good steps in varying the location, cutting forced exposition and ramping up the combat. However, it also makes a few missteps by making enemies that break the flow of combat, puts in too much platforming and, honestly, has a bit too much combat – or at least some combat arenas that are just too long-winded. This becomes especially noticeable when you’ve died 15+ minutes into an arena that isn’t even boss-related.

The links above are affiliate links. As an Amazon Associate, Wccftech.com may earn from qualifying purchases.

Doom Eternal: The Ancient Gods – Part One is a solid, meaty, and strong piece of DLC for Doom Eternal. It removes some of the chaff, cutting needless exposition, and makes some strong steps in gameplay. However, strange inclusions like enemies that kill the pace of combat, as well as even more ultra-precise platforming sections can throw off the whole “Doom” feeling of Doom Eternal. Also, and this is more of a subjective gripe, it’s just too difficult right out of the gate with some combat sections feeling like they last forever.

Call of Duty: Black Ops Cold War multiplayer review: “A back to basics COD with a drawback for every high point”