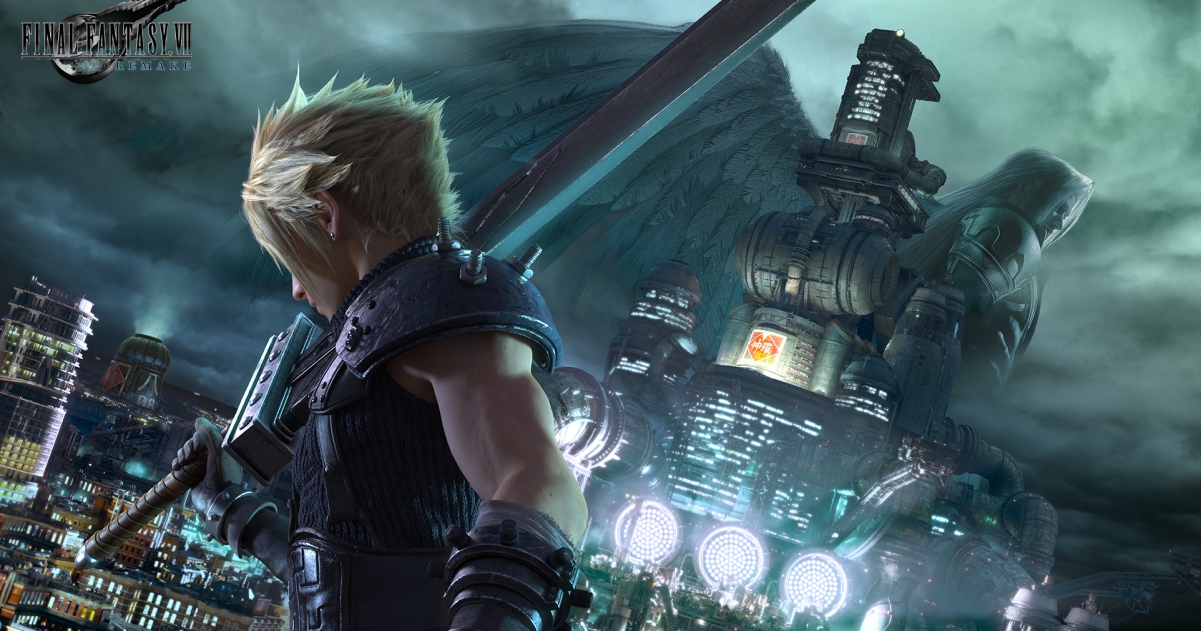 I remember Sony’s 2015 E3 press conference like it was yesterday. It was one of those magical moments in gaming – one where every announcement felt like it had years of anticipation bubbling away in forums and group chats, accentuating their impact when they finally landed and taking everyone’s breath away. And in 90 minutes that saw the reveal of The Last Guardian, Horizon: Zero Dawn, and Shenmue III, it was the re-introduction of gaming’s most talked-about JRPG that stole the show. Final Fantasy VII was getting a remake, and the standing ovation showed how two decades of waiting can bring a fanbase to tears of joy.

That was five years ago, and at last I got to sit down and spend a week playing through Final Fantasy VII Remake on PlayStation 4. The influence of the 1997 original cannot be understated: it brought a celebrated genre to the mainstream in the West while remaining a dearly beloved entry in that genre’s most prestigious franchise. That’s a lot for this game to shoulder, especially coupled with a roller coaster history of fans yearning for a remake to exist in the first place. That’s why it brings me so much joy – and honestly, more than a tiny bit of relief – to say that Square Enix have done this classic proud.

It’s important to get out of the way, for those who aren’t yet aware, that this isn’t a remake of Final Fantasy VII in its entirety. We’ve known for a long time that this re-telling will span several instalments allowing the developers to fill out the original story with brand new content. I want to stress, however, that this first part is a full game in its own right. It took me 31 hours to beat the story on Normal, while stopping to complete roughly half the side quests. At no point did it feel “episodic”, like it was holding back the good stuff for later entries. Instead, I’d liken it more to the first novel in a fantasy series, with a satisfying story arc that works in a self-contained capacity – even if there is obviously more to come.

That story is set in the industrial metropolis of Midgar, where the Shinra Electric Power Company are using the planet’s life force, known as Mako, to power the city. A group of eco-terrorists called AVALANCHE are on a mission to blow up the Mako Reactors that encompass Midgar and return Shinra’s power to the planet. Cloud Strife is a mercenary helping AVALANCHE on their crusade, only he cares more about their coin than their cause. From there, the game explores Midgar’s secrets while spending time with some of the most iconic characters to have ridden Chocobos.

If that sounds familiar to players of the 1997 original, it’s because Final Fantasy VII Remake follows many of the major story beats that made up the opening hours during its first life on the PlayStation. Naturally, this means a lot has been expanded upon, and that all starts with Midgar itself. The city is now so rich in detail and design, that I have seldom felt so immersed in a virtual setting.

From the claustrophobic rustic alleyways of the slums to the advanced cyberpunk streets of topside suburbia, Midgar feels alive. All my senses somehow merged with the sights and sounds of the places this game took me to, and there’s a greater focus on building intimacy with the environment thanks to the further depth added to an already established setting.

The same can be said of how Final Fantasy VII Remake portrays its iconic cast of characters. Impressive voice acting and motion capture aside, these characters work because they don’t betray what made them so endearing in the first place. The writing is careful in not uprooting any defining character backstories or traits, instead opting to spend more time getting to know them as people. There’s a greater focus on showing the mundanity of their everyday lives, which never teeters off into boredom because they are just so interesting and likeable.

Cloud has never felt so human when he’s forced to confront his relationships and vulnerabilities, but his signature badass-ness is still well intact. Tifa’s strong will is shaken by underlying anxiety, while Aerith’s breezy demeanour compliments every character she spends time with. And Barrett is now a walking meme in all the best ways possible. And that’s the thing, on top of all the melodrama and stoicism, there are plenty of lighthearted – even silly – moments that balance out the tone of the game, allowing its pacing to feel fresh across its playtime.

While the tone is varied enough to justify the magnified story, not every section of gameplay feels necessary or even fun. On a handful of occasions, the main path branches off into a side tangent with minor characters that feel underdeveloped and a waste of time. I wouldn’t be annoyed if these were optional side quests but being forced to revisit old combat areas for a purpose that doesn’t affect the main narrative in a significant way did feel tedious. There was always going to be padding in a 30-hour game based on the first section of a 50-hour game, but I wish more of the fat was trimmed.

These moments are the exception thankfully, and the sheer ambition and polish that runs through every decision in this game kept my jaw well and truly dropped. Progression is extremely linear, but then again, so was the Midgar section of the original Final Fantasy VII. It was always refreshing to reach one of the chapters that allowed me to spend a bit of time in one location – completing side quests, conversing with NPCs etc. However, the majority of my time was spent jumping from set piece to set piece, each one somehow one-upping the previous in scope and visual bravado. I won’t spoil them here, but if you have a crippling fear of heights, then maybe you should stick with Animal Crossing.

That brings me onto combat, which is always an emotional topic amongst Final Fantasy fans. With that said, even if I prefer the traditional turn-based mechanics of the classic Hironobu Sakaguchi games, I can’t deny this is some of the best action combat I’ve played in a JRPG. It seamlessly takes all the fundamentals of Final Fantasy VII’s battle system and translates them to real-time action. The ATB gauge gradually fills up in fights and is used for magic and abilities that can be programmed as shortcuts. Materia is still tied to weapons and armour, granting that character its function and independently levelling up with use. Limit breaks, summons and the three-character party are still here, just adapted to suit the frenetic energy of this new style.

There is a Classic Mode which sees the characters take turns for any diehard purists. But I’d highly recommend giving the real-time combat a chance, as it’s the most respectable example yet of Final Fantasy fusing traditional systems with modern speed. And it doesn’t blunt the difficulty either which ramps up considerably in the later chapters, draining my patience and potion supplies. It’s at it most exciting during the incredible boss fights. These onslaughts truly tested my ability to control the right character at the right moment while managing my ATB gauge, limit breaks, and summons. Getting an enemy to a “staggered” state requires an understanding of their weaknesses but leaves them hopelessly vulnerable to being overwhelmed with attacks. It’s these strategic nuances that necessitates thinking to go along with flashy button-mashing.

In case it wasn’t obvious by looking at these screenshots, Final Fantasy VII Remake is one of the most gorgeous JRPG ever made. The attention to detail I spoke of earlier is heightened by the crisp rendering of characters, objects and locations. There is the occasional blurry texture and pop-in, and some cutscenes can take a few seconds to load. But those cutscenes enhance the scope of the game to a degree surpassing the already impressive track record which the series has in this department. They never overstay their welcome, but I’ll be in awe of their magnitude and execution for some time.

And then there’s the music. The remake’s soundtrack takes the beautiful melodies of the original and builds upon them in moving – occasionally subversive – ways. Even having the clarity of these new arrangements be so enhanced over what was possible with mid-nineties sound design is reason enough to lend this game an ear. Yes, Sephiroth is still followed by a bellowing choir wherever he goes, and “Aerith’s Theme” continues to stand alongside “To Zanarkand” and “Theme of Love” as one of Nobuo Uematsu’s most stirring compositions.

Many gamers weren’t even born when Final Fantasy VII first took the world by storm, but now they have the opportunity to see why it is so revered. Final Fantasy VII Remake is a true accomplishment in the realm of video game remakes. It takes the iconic foundations of the original and uses them to blossom into a magnificent modern version. It simultaneously expands the world and lore to be more engrossing than ever while zeroing in on characters and their stories in a way that made me fall in love with them all over again. The game is liberated to achieve its technical ambition, innovative in taking the gameplay and story in exciting new directions, but most importantly, reverent to the timeless ideas that sparked so much passion 23 years ago.

Starcraft II: Heart of the Swarm