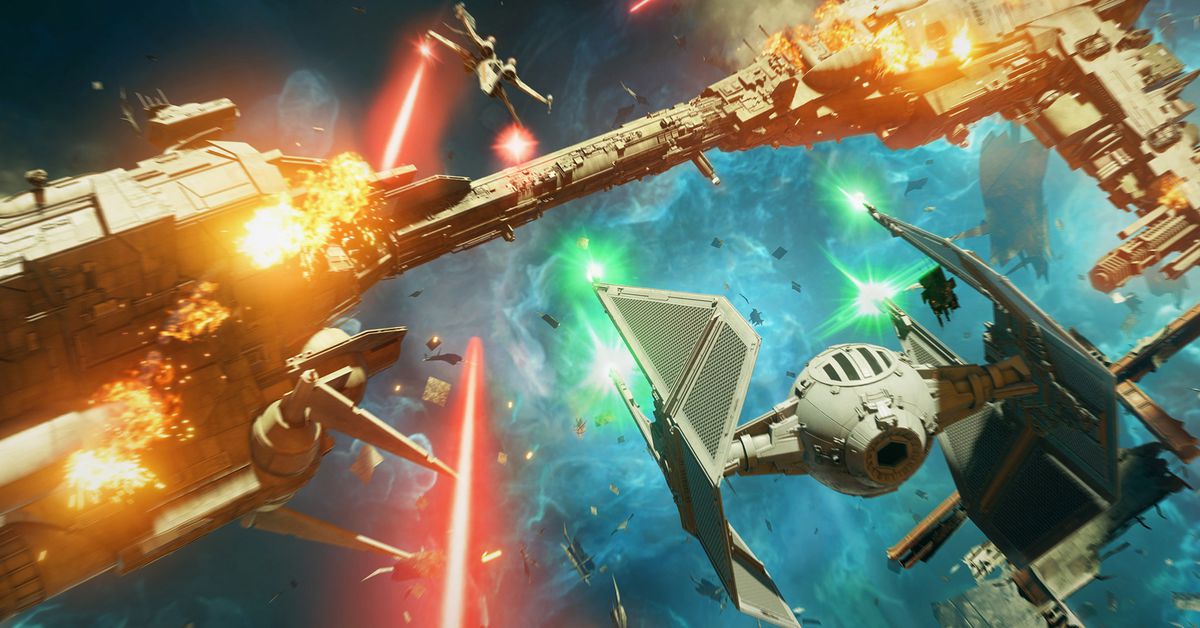 Star Wars: Squadrons is every inch the spaceflight simulation that fans have been dreaming of for a generation. It accommodates players in extraordinary ways, from the quality of its many controller options to its ability to form parties across multiple platforms. It’s also one of the most focused games that Electronic Arts has produced in the last 15 years.

When the game was announced in June, EA’s Motive Studios was clear on what fans should expect. Squadrons would be centered entirely around starfighter combat. Despite the $39.99 price tag, it would be a AAA-quality game deserving of the Star Wars license, playable across modern consoles and Windows PC. It would have a solo campaign, sure, but the meat of the experience would be a single, team-based multiplayer mode. And the whole thing would be playable with a host of peripherals — keyboard and mouse; joystick and throttle; controllers, of course; and also, virtual reality headsets.

After three days inside the cockpit, I’m here to tell you … It’s true. All of it.

Squadrons proves that EA is still capable of creating a polished, nuanced experience without the cruft of microtransactions or endless in-game collectibles. It’s a success on virtually every front — including its implementation of VR.

The gamebegins shortly after the destruction of the planet Alderaan as depicted in Star Wars: A New Hope, before catapulting years forward in the timeline to the end of Star Wars: Return of the Jedi. While playing, I jumped between two different sides of the same conflict, alternating between the evil Empire or the fledgling New Republic.

I began my journey by stepping into the cockpit of a classic TIE Fighter, and was taught how to control it by plinking at densely packed turrets embedded on a plateau. It’s the perfect way for players new to the genre to get their bearings — and for veterans like me to dial in their keybinds. Before the mission was over, I was spinning wildly, rolling, and pursuing enemy ships in every direction with ease.

It’s in these first few single-player missions where Motive establishes the game’s excellent pacing. Squadrons simply refuses to waste the player’s time. Wingmen stayed close to my ship, allowing me to direct the formation even though I wasn’t leading it. The action was always front and center, with scripted engagements that seemed to materialize wherever I was looking. Missions last about 20-30 minutes at most, and I never felt like I was looking under rocks to hunt down that one last enemy on the map.

That excellent single-player pacing extends to Squadrons’ narrative cutscenes, which fill the time between missions without being too long. These interludes tell a decent little Star Wars story, with cameos from beloved characters. The game also seems more than a little self-aware, and it leans into the franchise’s penchant for camp. At one point, a character even winked at me out of the corner of their eye when a famous pilot showed up in the briefing room. There’s not much in the way of set design — maybe three or four areas in all outside of a mission where you’ll spend your time — but the voice acting and facial animation get the point across.

My only disappointment with these cutscenes was that the primary way to interact with the other characters was to passively smile and nod. But again, Squadrons never said it wanted to be a role-playing game. EA promised a combat simulation featuring iconic starships; characters do the work of setting the emotional stakes for each mission, and nothing more.

The single-player campaign isn’t the star of the show. Neither is the bog-standard multiplayer dogfighting mode, which is little more than team deathmatch in space. No, the main attraction in Star Wars: Squadrons is called Fleet Battles, and it might be my favorite Star Wars multiplayer mode of all time.

Fleet Battles is a back-and-forth tug of war between two teams of five. Rather than emphasize one movie in the franchise’s long history, it seems to take the best bits from several films, and brings them together into something new.

The first phase of every Fleet Battle recalls Return of the Jedi, with a tussle in the middle of the map between 10 players, plus AI ships thrown in to make the thunder and crash of that first impact have weight. From there, phases two and three slowly narrow the playing field like the walls of a trash compactor, bringing colossal capital ships closer and closer together. There’s the daring assault on the bridge of the Executor from Jedi, of course, but also the high-stakes fleet engagement seen at the end of Rogue One. The tension ratchets up nicely, and you’ll actually need to rely on teamwork to win the day.

The Fleet Battles mode is so well constructed, so elegantly balanced, that it allows Squadrons’ complex system of passive and active abilities to come to the forefront. With 60 modules in all to choose from, there are easily three or four good ways to build out each of the game’s eight starships for a number of different combat roles.

For instance, the pokey little TIE Bomber begins the game with Multi-Lock Missiles, which allow it to target multiple enemy starfighters at once and hold its own in a dogfight. Arm it with a Beam Cannon, and it becomes a serious threat to capital ships — but also a slow-moving, juicy target for enemy fighters.

The X-wing, on the other hand, starts out as a jack-of-all-trades starfighter. It’s got decent guns and good survivability thanks to a stock Repair Droid. Swap that droid out for an Assault Shield — which strengthens the forward-facing shields for a limited period of time — and it becomes a nimble, darting tank. Paired with heavy weapons like an Ion Torpedo, the X-wing is capable of whittling down capital ships as well, while also remaining a threat to enemy fighters.

Similarly, there are complementary builds for these and other starfighters that create dedicated interceptors, support ships, and more. Best of all, none of these different components feel overpowered. Instead, they change what ships themselves are capable of. It’s up to individual players to find what works best for them, and to learn how to use them to their advantage in a given situation.

Finally, I want to return to Squadrons’ use of VR.

I’ve spent a lot of time flying in modern spacefaring games like Star Citizen and Elite Dangerous. I’ve also put hours and hours into modern flight simulators, including DCS World, IL-2 Sturmovik: Great Battles, and this year’s Microsoft Flight Simulator. Flying around in Star Wars: Squadrons feels as good as any of them, but Motive’s implementation of VR puts the game in a class by itself.

VR might have actually given me a slight advantage

From inside my HTC Vive Pro, I feel totally immersed in the action. I’m surrounded by cockpits that look just like they do in the classic films. My ears are filled with familiar Star Wars sounds that I can immediately recognize, and Squadrons’ excellent binaural audio brings it to life all around me. I can look in any direction, moving my head as fast as I want without the game struggling to keep up with me. Even while boosting, rolling, and turning to keep a bead on other players during multiplayer, I always felt in control.

In fact, I think that VR might have actually given me a slight advantage.

Simply put, Star Wars: Squadrons is the total package. If all you have at your disposal is a console, a decent TV, and a working controller, you’re going to have a wonderful time. If you have a throttle, stick, and rudder pedals, you’re really in for a treat. And, if you happen to be able to afford VR, you may never want to take that headset off again.

Star Wars: Squadrons will be released Oct. 2 on PlayStation 4, Windows PC, and Xbox One; it will also be compatible with the PlayStation 5 and the Xbox Series X when those consoles launch in November. The game was reviewed on PC using a pre-release download code provided by Electronic Arts. Vox Media has affiliate partnerships. These do not influence editorial content, though Vox Media may earn commissions for products purchased via affiliate links. You can find additional information about Polygon’s ethics policy here.

‘Star Wars: Squadrons’ is (almost) the starfighter sim I’ve been looking for