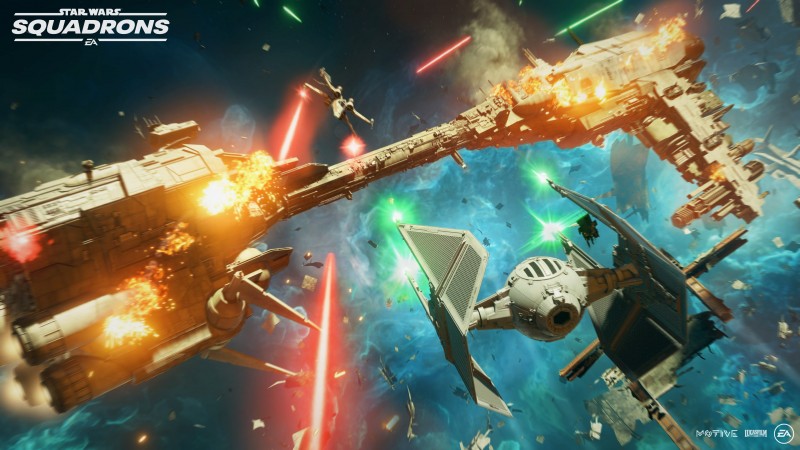 A hail of green laser fire rips dangerously close to my X-Wing’s cockpit as I rocket through the debris of a downed Star Destroyer. A TIE Fighter gives chase, and my astromech unit alerts me that a missile strike is imminent. I put my X-Wing into a spin and dive through a narrow gap in the wreckage, narrowing scraping a wall. In this moment, the Star Wars fantasy of piloting an X-Wing screams with excitement, showing how thrilling the dogfighting between the Rebellion and Empire can be. Developer Motive Studios has created a fantastic multiplayer experience that has the visual detail and edge-of-your-seat thrills of Star Wars’ epic space battles, but only fires direct hits in the online space, struggling to captivate with its single-player content.

Star Wars: Squadrons is set after Return of the Jedi, with the second Death Star scattered to cosmos and the Empire retreating while looking for ways to strike back at the Rebels. This era gives us the cool ship designs from the original movie trilogy, but with more firepower than Luke Skywalker had at his fingertips. Whether I was in an A-Wing in a hunter role against a TIE Interceptor or a Y-Wing on a bombing run against an Imperial flagship, each craft feels distinct and is a blast to control. The movement is so smooth and precise that you can skip along the surface of an asteroid and safely snake through a space station’s interior without dinging the hull. And even if you do, the game is forgiving in damage, allowing you to quickly correct the flight path. 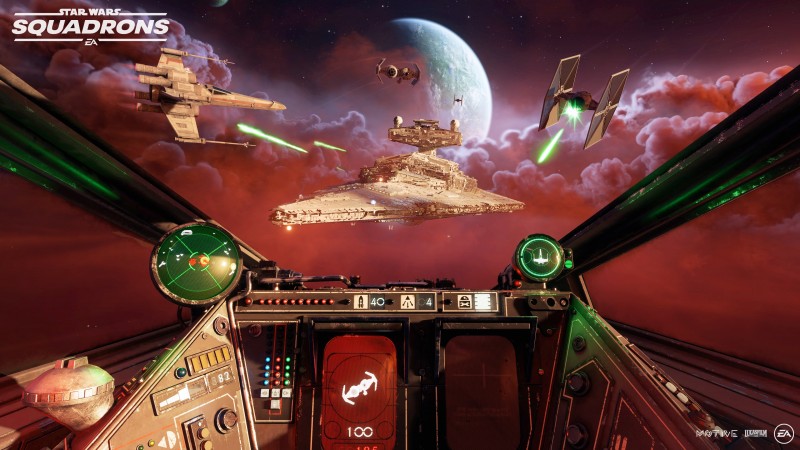 Unlike most space shooters, Squadrons is only playable from the first-person perspective. This is an odd design given just how iconic these ships are, but the locked viewpoint makes sense given how many systems the player has to monitor at any given time. Rather than littering the HUD with these meters, most of them are visible within the ship’s cockpit, and they all function admirably, allowing for quick reads on ammo, radar, and most importantly, how power is balanced throughout the ship. With a click of a button, the player can adjust the power to favor shields, weapons, or speed. I was constantly switching for various needs, and it always feels great to get that extra boost in the thrusters or to rattle off more laser blasts to down a TIE or A-Wing.

The loadouts of each of the eight ships can also be tweaked in a number of ways, such as switching a steady laser to burst fire or giving up hull integrity for shields. The number of components that can be swapped is fairly deep, allowing the player to tweak performance in a number of strategic and satisfying ways.

No matter what ship I was piloting, the one-on-one battles against other player-controller ships are almost always intense. These duels can be quite long, as the targeted vessel can make a run for it, dance every which way through cluttered airspace to dodge laser fire, and perhaps get the upper hand and start firing back. If an opponent is shielded and at full health, you’re in for a good fight. Missiles will be dodged with countermeasures, and repair kits used to get health back. The maps are also nicely designed, providing surprisingly cluttered areas for the harrowing chases and open space that can be used to lure enemies into traps if you are coordinating with your teammates.

The online multiplayer in Squadrons is limited to just two avenues of play: Dogfight, which is wildly fun and is determined by kill count, and Fleet Battles, the heart and soul of this experience that delivers awesome wars of attrition. Fleet Battles flow to a moving front that forces you into offensive and defensive positions. Victory is achieved when your opponent’s flagship is destroyed, which takes time; victory can come down to barely visible slivers of health on both opposing flagships. 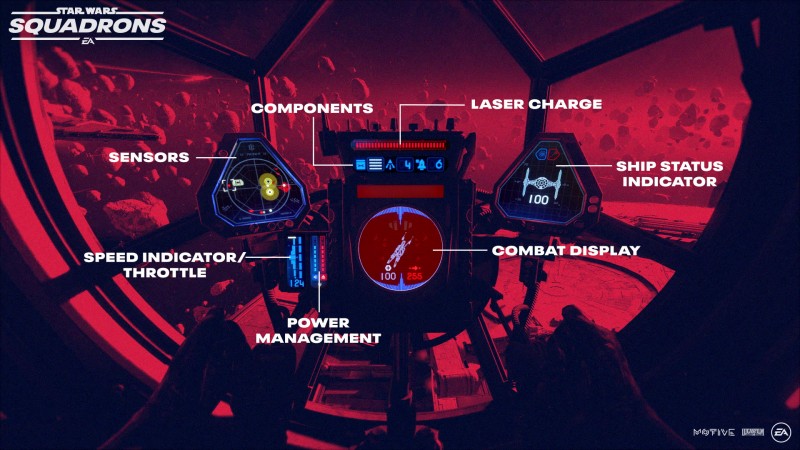 Both multiplayer modes are 5v5 conflicts. The small number works well for dogfighting, since the maps accommodate it. Fleet Battles could use more players, but the scale feels massive thanks to the healthy presence of A.I.-controlled ships, many of the larger variety. Both modes deliver plenty of exhilarating dogfighting moments, gorgeous backdrops to fly against, and iconic Star Wars music and sounds to set the tone.

After a match concludes, experience points are accumulated and currency is handed out to purchase new cosmetic items for both your ship and pilot, including goofy bobbleheads which are always viewable in the cockpit. The player can use a different earned currency to buy new ship components to add even more depth to the loadouts.

I love EA’s stance of not having microtransactions or DLC, but the well of unlockable cosmetics is surprisingly shallow, and relies too heavily on alternate colors for the same item. I only had my eye on around a dozen items, and the unlock time isn’t extensive. While multiplayer is great on its own and has depth in just being fun to play, not having that carrot dangled in front of you to get new stuff you care about hurts the drive to play more.

While Squadrons’ single-player campaign introduces a number of cool Star Wars characters, most of the story is told as they stand around in a hangar or at the briefing table. It doesn’t have much of a pulse, even though the narrative setup of a mysterious “Starhawk” project is quite good and remains an intriguing focus point for the entire arc. When plot is delivered mid-flight, the dialogue is rough and lacks impact, and certain moments could be framed more clearly.

Flying all of the ships in the single-player experience remains enjoyable, but the enemy A.I. doesn’t put up a good fight, and is the worst part of the entire game. The A.I. pathing is also a mess. Watching a TIE Fighter fly directly into an asteroid and then slowly spin on its axis to get free made me cringe. Some of the set pieces are good, but most of the campaign missions play out like mini tutorials, teaching new tactics even late into the game. 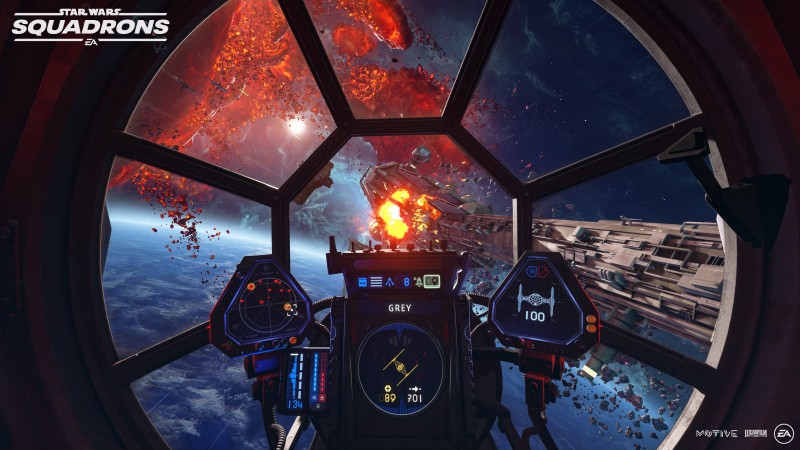 All of Squadrons’ content is fully playable in VR, and is a perfect fit for this medium. Through a headset, the battles feel like they are much larger in scale (even though they’re exactly the same as on TV), and I loved being able to sneak a quick glance at my astromech unit whenever it chirped. A variety of flight sticks are also supported, though I did not play with one for my review. EA included a full suite of accessibility options, and crossplay is supported for all systems, including VR.

Squadrons’ single-player may fizzle out frequently like a malfunctioning hyperdrive motivator, but the multiplayer continually impresses and is worth the price of entry alone. Flying in formation with a group of friends put a smile on my face, and that was just the calm before the storm. When the lasers start flying, Squadrons’ multiplayer can be nothing short of exhilarating and a great test of skill, pushing players to be clever in the cockpit to outthink and outmaneuver opponents. Given just how enjoyable it is to pilot an X-Wing or TIE Fighter, this is a multiplayer experience I will continually go back to, even if EA doesn’t support it with new content. It’s just fun to play, providing something different compared to most of today’s competitive games.