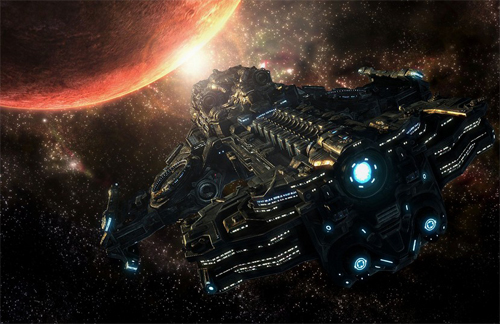 It’s been 12 years since the release of the legendary real-time strategy game Starcraft. And while the world turned, Blizzard Entertainment’s scrappy, enduring IP remained set in its ways, gathering massive worldwide followings and becoming South Korea’s unofficial national sport by dint of how spectacularly fun and addictive it is to play. Blizzard seems hellbent on making lightning strike twice with the release of the first of three planned Starcraft sequels: Starcraft II: Wings of Liberty. And they’ve succeeded—but only because of how little was changed from the original.

For all of its new bells, whistles and baubles, Starcraft II has altered very little of the classic Starcraft formula. There are still three main races vying for dominance on the edge of the galaxy—Terran, Zerg, Protoss—each unique in their style and strategy, and the basic gameplay is as addictive as ever: resourcing and rushing, micro and macro. It’s an approach that, at least initially, seems counterintuitive; while RTS games have strived to add hero units, multiple races (that often amount to little more than unit skin changes) and scads of mostly-useless filler and expansion packs, Starcraft II’s core gameplay is almost unerringly true to form.

Part of that likely owes to the fact that legions of Blizzard faithful would stage an armed insurrection (or at least sit-in protests in Seoul and Irvine, Ca.) if Starcraft II deviated too much from its still-wildly-popular predecessor. But little has changed because very little needed to be changed: The Starcraft gameplay formula is elegant in its balancing of the three races, allowing for a cornucopia of tactics, strategies and build orders that are only as limited as the number of clicks-per-minute you can pull off. Starcraft II is demonstration of that most sacred design principle: “If it ain’t broke, don’t fix it.”

Visually, Starcraft II puts in a workmanlike showing for a top-down perspective strategy game, with its bright, cartoony style and color pallet for environments and characters (as Blizzard seems wont to do these days). There are intricately-detailed unit models, plenty of muzzle flares, depth-of-field explosions, gory splatters and luminescent laser weapons; all of which dovetails nicely with the gritty, far-flung sci-fi of the Starcraft universe. And the graphics are, refreshingly, very scalable—a nice touch on Blizzard’s part for players with lower-end systems.

Though multiplayer is the bread-and-butter of the Starcraft II experience, the single-player Terran campaign is—while a little on the short side—an admirable piece of storytelling well worth the time of anyone with an interest in the Starcraft universe’s fluff and lore. You can select from a handful of missions at any point in the story, split between plot missions and side-missions offering units exclusive to the campaign, mercenary squads, building and troop upgrades, and other carrots that are worth investigating as you gear up for the final battle. The plot is gloriously over-the-top, and characters are bombastic cutouts, spewing one-liners and hamfisted dialogue in the most unselfconscious ways possible. But this is par for the course for Blizzard, and the game has a kind of campy, tongue-in-cheek nature that’s entirely endearing. Challenge missions and achievements add even more life to single-player for those of you not quite ready to be Zerg rushed on Battle.net.

And the multiplayer suite will destroy you, psychologically if not physically. It’s an entirely different game than the singleplayer campaign—merciless, cutthroat competition that requires you to be on top of your game at all times. It’s extremely unfriendly to novices, but there’s also no better way to get good at Starcraft II in short order than the trial-by-fire of multiplayer. The Battle.net 2.0 system impresses with robust friend and matchmaking systems, ladder and tournament play, and an impressive number of custom maps already available. The sole disappointment is Blizzard’s abandonment of LAN support—all multiplayer matches must now be played on Battle.net, though hopefully they’ll come around and patch in LAN play at a later date.

Blizzard has been called the Pixar of video games, and that’s a damn apt comparison—they took plenty of time developing and releasing Starcraft II and it shows in the incredible level of polish, sophisticated presentation and ultra-slick gameplay. But more than that, Starcraft II banks on something more intangible: It’s an utter joy to play. There’s a certain, simple fun in slugging it out, back-and-forth against an opponent, only to finally get your units behind their lines and watch in satisfaction as your master-tactician ploy pays off and you level their base. It’s the exact same thrill you got from playing the first Starcraft, only bigger, brighter, and more compelling than ever. Sometimes, things don’t need to change because they’re simply timeless.

Company of Heroes 2 on Steam